Niall and Kaz and their daughter Molly  loved their house close to Seven Dials but really wanted more living space.

“We love it here in Exeter Street but also wanted more room. The loft had already been crudely boarded and used as a workshop but we thought that the space had far greater potential. Initially we called in a few specialist firms to quote. That was quite depressing, as many seemed to have very fixed ideas of what they could do, their conversions fell into named bands and if there were things that we wanted extra they would immediately say that we needed to look at the next, and inevitably more expensive range.”

“Then Nick from Soundhouse came along. His approach was far more flexible. There were no set models to choose from but a thorough briefing and design process in which we were totally in control of what we wanted but also dependent on the knowledge and skill of the Soundhouse team.”

“They undertook the complete project from Stuart’s architectural drawings to the final build and fit. We were convinced that the project would mean major upheaval but in fact the team was incredibly efficient, clean and tidy. After they arrived each day we hardly saw them, they got straight down to work and had surprisingly few tea breaks. And when they did they drank green tea and not the standard ‘builders’ tea.”

“At the end of every day they would clean away any mess and vacuum through the house, leaving it spotless. It couldn’t have been an easier process. They also brought the whole project in on budget and on time. After years of listening to other people’s horror stories about building work that went wrong, we had the opposite experience.” 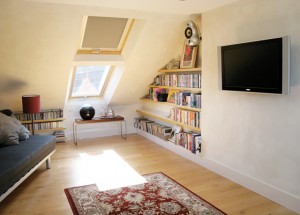 And it’s easy to see why they are so delighted. Their loft is now a smart and clean-lined new room which acts as an extra living space but has been designed so that it can also be used as a guest bedroom. Every available space has been used to great effect, with clever storage sneaked into spaces that would otherwise be wasted. It has plenty of headroom too with the design maximising on the available height. It might be in the room but there is no sense of this being a cramped attic and little evidence that it is a conversion. Every effort has been made to make the transition from the original layout to the new space totally compatible. The staircase rails and banisters are perfectly matched and the old simply flows into the new.

The Author has not yet added any info about himself